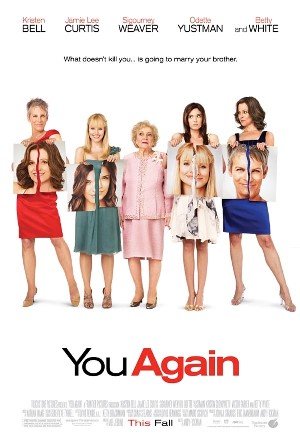 A comedy starring Kristen Bell as Marni, who discovers that her brother, Will, is marrying Joanna, her high school nemesis who made her life hell. Incidentally, Joanna’s aunt, Ramona, had some beef with Marni’s mother, Gail. Both Gail and Marni have to relive their high school nightmare during the weekend of Will’s wedding.

It seems that high school is a period that most people either loved or hated. And it seems Gail and Marni hated it, especially Marni who has ‘MOO’ as her initials. Now, her nightmare from high school, Joanna, is acting angelic and she tries all means to make her reveal her true self. The dancing lesson was extremely hilarious because I think Gail has been watching too much Dirty Dancing. Kristin Chenoweth steals the scene as renowned wedding planner Georgia King. The story is kinda predictable but I guess the ending would be slightly surprising. Hall & Oates did a cameo by performing their songKiss On My List during the credits!