This Superman reboot directed by Zack Snyder stars Henry Cavill in the title role and Amy Adams as Lois Lane. There’s a strong focus on his origins from Krypton and a lot on his pain while growing up.

I caught this blockbuster two weeks after  its release and it was probably the most rewarding 143 minutes. I’ve always wondered why superhero movies pass by in a flash even if they are more than 2 hours long. Well, first thing you notice is Henry Cavill’s incredible physique! That magnificent chest! That oil rig scene sent many a ladies running for cold water! Woots!

There’s plenty of flashbacks into Clark Kent’s childhood and many of them involve his human father, Jonathan Kent, played by Kevin Costner. Some scenes are heartbreaking to watch. Personally, I prefer Smallville’s Jonathan Kent (played by John Schneider). I feel the movie version puts a lot of pressure on Clark concealing his identity and probably why he left home to “find himself”. There are little bits of trivia to pick up all over the movie – like the Smallville Sears store that got crashed into and the Lexcorp trucks.

It’s scary to find so many Kryptonians on Earth because how can Superman win? Everyone has superhuman strength! Each time they throw a few punches, destruction of vehicles and buildings occur. The ending can be controversial to some (I mean, HOW can Superman do that? But that is the only way out!)… and it is not without consequences. Look at that painful, agonizing scream Superman makes. Even with the bluest eyes, dear Clark Kent carries a lot on that broad shoulders of his.

An ageing baseball scout, Gus Lobel, goes on a recruiting trip with his daughter, Mickey, when his vision starts to fail him.

Gus Lobel: Being comfortable is overrated.

I really liked the movie after watching it even though I’m not a fan of baseball or Clint Eastwood. Maybe because there aren’t many father-daughter bonding films around (if there are others, please let me know!) and I liked how the story of this father-daughter pairing goes. Amy Adams is very charming as usual and I liked how she’s tough and independent, whether it was at work or helping her father watch the players. The only time she was vulnerable was when she dealt with abandonment issues.

The final scene where Mickey “redeems” herself with her father and Johnny was screaming with girl power because Mickey knows the game better than some underhanded type-everything-in-my-computer guy (Matthew Lillard – when did he like playing such assholes? First in The Descendants, now here?).

The movie probably wowed me more because I don’t know the game and maybe because I like Amy Adams and Justin Timberlake, though it doesn’t mean I like both of them together. They banter well, but just don’t have that romantic spark to me.

The Fighter tells the story of Micky “Irish” Ward (Mark Wahlberg), a professional boxer, and his half-brother, Dicky Eklund (Christian Bale), his trainer and former professional boxer who has now succumbed to crack addiction. Along with their manager-Mother, Alice and seven other sisters, they support Micky in his career but Dicky’s addiction impedes Micky’s path to be successful – being late for training, for his flight to Micky’s match and being arrested for charges. Micky also has his support system of O’Keefe, a police sergeant who knows about Dicky holding him back, and bartender-girlfriend, Charlene, who is very tough and fights back against Micky’s overbearing mother and sisters. Can Micky ever break free of his family to be the champion he was meant to be?

WOW. It’s a really good movie with actors giving their all for their performances and you find yourself rooting for Micky against the odds he faces. I’m in awe of Amy Adams because she plays such a tough chick, lots of f-bombs and her attitude is rockin’. She delivers my favourite line from the movie, and possibly out of all the Amy Adams films so far. 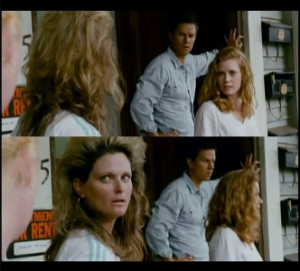 Well, she really does have nasty hair (along with her six other sisters – same hairstyle). Their mother, Alice (Melissa Leo), is domineering and seems to be money-minded and turns a blind eye when Dicky is concerned. Christian Bale lost 30 pounds for this role and it made his eyes look really big and grin really wide. He can’t help his addiction and can’t seem to forget his few minutes of fame when he was at his prime and it was prison that really shook him up and brought him back to reality. The ending match was really hard to watch because Micky kept getting hit but I did learn that there’s a strategy in boxing.

Sunshine Cleaning revolves around two sisters, Rose and Norah Lorkowski, who try to get into the lucrative business of crime scene clean-up and slowly find themselves in the process. Rose, a former cheerleading captain, is now a single mother having an affair with the then-quarterback who married someone else. Norah, on the other hand, gets on from job to job without having any form of stability in life.

They encounter gory suicide and murder cases and have to scrub off the blood, body tissue and fluids as well as maggots (big and small ones). These physical messes are incomparable to the psychological ones, and they find meaning in helping those who have lost someone in those suicides or murders. Along the way, their relationship improves and they finally come to terms with the loss of their mother when they were both kids.

As the prequel’s slogan goes – where history comes to life – this time it’s no different! The exhibits at the Museum of Natural History are being shipped to the Federel Archives in lieu of revamping the museum. However, Larry (Ben Stiller), now a successful inventor, knows better when the magical Egyptian tablet is shipped over as well. Now, the largest museum comes to life!

The bad guy is Kahmunrah, a pharaoh mummy, who plans to dominate the world in his second chance to live. He is so funny defending his outfit (tunic) which the others insists it’s a dress, and watch his attitude towards Darth Vader!

(Confronting Vader)
Kahmunrah: Is that you breathing? Because I can’t hear myself think! There’s too much going on here; you’re asthmatic, you’re a robot. And why the cape? Are we going to the opera? I don’t think so.

Too bad the Force was not with Darth at that moment.

I loved the part where they jumped into the portrait, where Larry left his mobile phone in that era. Bet you didn’t know the sailor that picked up his phone was Joey Motorola. Larry’s sidekick is the fiesty Amelia Earhart, who uses cool ’30s phrases like “jimmy-jacked” and “moxie”. Oh, did I mention the Jonas Brothers are in the movie too?! They are the singing cupids (not cute at all but still recognizable). I also enjoyed the various appearances of the cast of The Office. Overall, the movie provided really good, hearty laughs.

Doubt is set in the 1960s and revolves around a nun who tries to confront a priest after suspecting him of abusing the only black student in the school. In times of change, the priest aka Father Flynn tries to change some of the school’s strict traditions and is met with some fierce opposition in the form of Sister Aloysius. Some of the lighter moments involve the hoo-ha about ballpoint pens, sugar cubes, light bulbs and some of the quotes by Sister Aloysius herself. Great acting by Meryl Streep and Philip Seymour Hoffman. 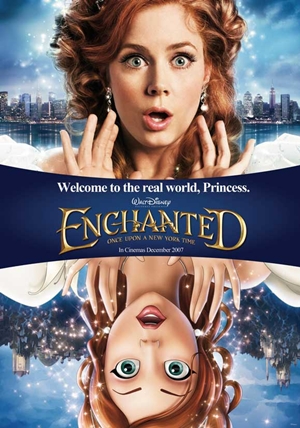 OMG! I saw Enchanted! It’s a really funny film that mixes reality and fantasy, 2D cartoons into live videos. Amazing, even though I think people would think it’s quite simple.

The story begins when Giselle is tricked into the real world – New York, in this case – by the evil Queen who worries about her throne being usurped once Giselle marries Prince Edward just after one day of meeting each other. Somehow I can’t help rolling my eyes. Yes, I don’t believe in love at first sight. Anyway, the fun starts when the naive and innocent Giselle encounters the harsh reality and practically sings and dances at any point in time. She can just “Ahhahahah ahahahhahh” and the little rodents and insects are at her command. The roaches were just damn disgusting. Eeew. You just have to watch it for yourself to see the very skeptical Patrick Dempsey transform into song-and-dance lovin’ fairytale guy. And James Marsden CAN REALLY SING! Mr. Cyclops singing! I’m truly convinced now with Hairspray and Enchanted under his belt of singing movies.