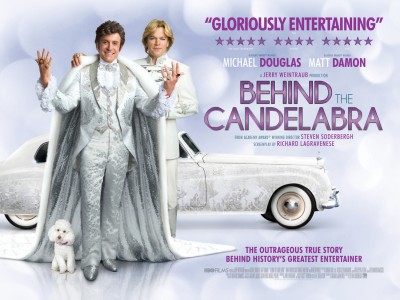 This is story of Liberace and his lover, Scott Thorson, based on his autobiographical novel.

I don’t know much about Liberace but I’ve certainly heard of him and his extravagant costumes. I did not know he was a pianist, only that he was a performer. This movie really opened my eyes because Michael Douglas has still got it. Audiences got a glimpse of this piano-playing skills and his va-va-voom house. Every item in his house is either an antique, golden, marble-like or it sparkles. Every item just screams luxury and indulgence! Personally, after watching this, I feel rather dull and unadorned because I’m not much of an accessories person. Overheard at the cinema, “I feel like buying rings after watching this”. True story.

What’s interesting is how he lured and seduced Scott Thorson into becoming his secret lover. First it’s the pool, then the Jacuzzi then it’s the bed. It’s all nice till Liberace requested Thorson to be a younger version of himself and engages a plastic surgeon to transform his looks. Even Rob Lowe transformed his looks to play the plastic surgeon. Creepy looks! This is like a forewarning for face lifts. Interesting movie to watch though it gets sad towards the end when their relationship gets ugly.

STAY THROUGHOUT THE CREDITS FOR SCENES OF PIANO TRINKETS!

Directed and produced by Morgan Spurlock, delve deep into the boys’ lives, their beginnings from The X-Factor to selling out Madison Square Garden. It also contains ‘live’ footage from their concert at the London’s O2 Arena.

I wished there were more clips from their X-Factor days. Don’t they look so young and adorable? And their hairstyles! Wow, this is a boy band where all five members have GREAT HAIR. They are a playful bunch, creating trouble for their handlers who have to chase them around. It’s also sad to see their mothers and families missing them so much because the boys are on the road so much. That being said, I would totally go for their concert if they were to come to Singapore. Sorry, Moms of One Direction, you’ll have to make do with their standees.

EVERYONE – GO TO THE ONE DIRECTION POP-UP STORE BEFORE IT ENDS!

I won’t say I’m a huge fan of Katy Perry but I like her songs and I’m in awe of her features and figure.

Watching this documentary has been a real eye-opener because she didn’t achieve “instant fame” by being famous on Youtube but rather, she never gave up even though she was stuck at record companies which didn’t seem to be doing anything for her career. Her Pentecostal upbringing reminds me of the Followill brothers upbringing – also Pentecostal – and look at where they are now!

The best parts were Katy’s costumes for her Teenage Dream world tour. It’s candy-themed and they glow, they move and they sparkle! I love her hair! She’s the only one who can rock blue hair, pink hair and purple hair! The backstage scenes are the most intimate and real, showcasing her buddies and friends who have been with her before she became THE FIRST FEMALE ARTIST TO HAVE FIVE #1 HIT SINGLES FROM ONE ALBUM! That’s an extraordinary feat, especially when it’s just her second album!

The saddest part of the documentary was the revelation of her divorce with Russell Brand. Anyone with a heart who watches that scene will definitely tear up. Although I don’t like Russell Brand much and always felt that Katy was too good for him but it was heartbreaking to watch that scene. Here’s hoping that she gets a better, fresher second start at life!

This is a documentary following Jiro Ono who is probably the best sushi chef in Japan and the owner of the Sukiyabashi Jiro – the only restaurant in Japan to be awarded the Michelin three stars. At the ten-seat, sushi-only restaurant, you have to make reservations months in advance to savour the sushi.

They are very dedicated towards their jobs and the quality of their sushi. You can see the hard work that goes behind a slice of raw fish, egg and the rice. Every piece of it is painstakingly created. Jiro creates a special course for his customers based on the catch of the day that will enhance the taste of each piece of sushi. He gives ladies a slightly smaller piece so that they may have the leisure to chew and savour without having to rush to the next item. He even notices whether one is right-handed or left-handed so that he can place the sushi at a comfortable position.

I’m a Gleek and I think every Gleek should watch this.

And good marketing there, limiting the movie’s run to only two weeks! Two short weeks!

Lea Michele was simply amazing – don’t you just feel like crying everytime she does a solo? There’s also Darren Criss, doing his thing with The Warblers – the best thing that happened to Glee besides Darren Criss himself. Dancing-wise, Harry Shum Jr. and Heather Morris take the hat. Loved it when they danced to Valerie. And of course, Heather Morris’ boobs were amazing in 3D – she said so herself! Best of all, Kevin McHale (Artie) was dancing too!

Loved the encore performance of Somebody To Love during the credits – one of my favourite songs from the entire series!

This is probably the only time any KOL movie will be on the screens of Singapore so if you saw it, good for you. There are plenty of videos from their Youth & Young Manhood and Aha Shake Heartbreak days and it was pretty refreshing to see them so young and… bearded. OMG I forgot how much I missed them all bearded and long-haired.

There was this really old video of Nathan and Caleb singing their gospels and they looked so clean-cut! Not much mention about Matthew (unfortunately) since it was mainly focused on the three brothers and their piercing blue eyes, but I loved that they used the photo where young Matthew broke two arms. Do you know how difficult it is to break both arms?

Yup, that’s what I “learned” from watching this biopic/concert. Well, I wouldn’t say it’s much of a concert because you only see large snippets of the performance. But it was useful in gaining insight on one of the world’s biggest popstars now. Personally, I liked those home videos where a really young and adorable Justin plays the drums and churns out decent beats on a wooden chair.

Then you get to the meteoric rise of the popstar and you can really see his dedicated (rabid/obsessed) fans following him around until he has to cancel his appearances due to security reasons. I also love the fact that he and his crew go around giving free tickets to people who cannot afford them or didn’t get them because they were snatched up like hot cakes. And he makes it a must to get up girl on the stage whenever he sings One Less Lonely Girl, then he serenades her, puts his arms around her and make her and everyone in the audience hyperventilate.

There are lots of cameos and performances by other artistes such as Usher, Sean Kingston, Miley Cyrus and Jaden Smith. OMG CAN I JUST SAY THAT JADEN SMITH IS SO FREAKING CUTE ESPECIALLY WHEN HE’S GOT HIS AFRO HAIR!!! It’s wayyy bigger than his head! I like his blinking heart t-shirt too!

OMG I hope it’s coming to Singapore, best if it’s on the big screen!

I do hope there’s more of Matthew!

I managed to catch one of the last few screenings of Capitalism: A Love Story last week and it’s greatly entertaining.

The documentary film focuses on the recent financial crisis and the recovery stimulus, and manages to convince the viewers that everything was a result of capitalism – an evil that should be best eliminated. The poor gets poorer while the rich get richer; middle class families being driven out of their homes due to foreclosures and end up working for the rich people that drove them out of their homes. Talk about vicious cycles.

There was a term “plutonomy”which means that the top 1 percent of the population controls more financial wealth than the bottom 99 percent. Basically, an advantage for those wealthy but a problem when it comes to politics as the 99 percent are more likely to bunch up together and fight for their rights. There’s also the “dead peasants” insurance schemes that employers buy for their employees such that they would gain from their deaths. The part that touched home was when Moore went to Wall Street asking around for the definition of “derivatives”, and even after a pretty thorough explanation from a Wall Street expert, he’s dumbfounded (so am I).

The most entertaining part would be Moore going to the major banks with money bags so that they could return the money the government used for the bailout. One of the scenes earlier showed him interviewing a committee head in charge of the bailout and even she says she has no idea where the money went. Thus, the fitting use of “crime scene investigation – do not cross” yellow tape across these banks! 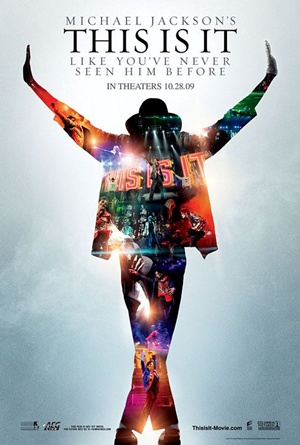 Limited to a two-week run, I managed to catch This Is It on the last weekend.

The film documents exclusive footages of behind-the-scenes rehearsals of MJ’s would-be concert. Throughout the show, you can sense his dedication to perfection; attention to minute details in the music and his pitching, the effects of the shows and the dancers. You can tell he’s a really nice person and he’s polite to the crew members – no airs at all. If I hadn’t seen this show, my impression of MJ would remain that of a baby dangler and an extreme fan of plastic surgery (gone wrong). After the show, I guess I see more of the icon/idol/superstar that the fans see him. However, I still feel that the movie is another way to milk the already-dead MJ for more money. Life is sad, death seems sadder.

To quote a line from KOL’s The Bucket: “too young to die but old isn’t great”.

To be honest, I was kinda anticipating it before the movie opened, but I’m not an extreme Jonas Brothers fan. Just that when they keep appearing on TV and I keep catching them on it, and when people scream, you scream; when they sing, and you start singing too. Not to mention, it’s in 3D! My next two 3D movies will be Up! andMonsters vs. Aliens!

Anyway, the concert-movie was a little short (76 minutes) and they played quite a number of songs, most of which I do not know except for the real popular ones likeS.O.S., Burnin’ Up and This Is Me (from Camp Rock – which I watched too). Demi Lovato and Taylor Swift guest stars and sings along with the JoBros. You get to go behind the scenes, experience their popularity, the fan-stampede and get to see Joe Jonas shirtless! Oh, Nick is really talented- he plays the guitar, piano and drums! But he’s so young… LOL!

Overall, their concert was pretty big and the stage design was very nice! Their emblem was flaming and the JoBros even sprayed foam at their audience! Man, those sprays were huge! And I stayed till the very end because even the credits were in 3D!