This is probably one of the weirdest (worst?) movie anthology I have ever since.

It is probably meant to be crude, so try not to be too offended by some of the stories in there. It is also best to take with a pinch of salt and laugh at everything. One of the reasons I wanted to watch it was Emma Stone but I wasn’t really taken by her story with Kieran Culkin as her ex-boyfriend. The opening story with Hugh Jackman and Kate Winslet drew the most laughs along with the one starring real-life husband and wife, Chris Pratt and Anna Faris. There are some really random advertisements in between the segments and I think the Tampax commercial is the funniest.

Watch it if you’re really bored and want to watch A-list stars do and say silly (explicit) stuff.

Managed to catch How To Train Your Dragon after almost a month since it opened because I have been hearing good things about it.

Based on a children’s storybook by Cressida Cowell, the story takes place in a Viking village where the adult Vikings are dragon slayers because their livestock are constantly being raided by dragons. Hiccup is the son of the Viking Chief and longs to become a dragon slayer. During a dragon raid, he manages to shoot a Night Fury, the rarest dragon that even his father has not seen. The next day, he goes to find the Night Fury in an attempt to kill it but realizes he cannot bear to. He sets it free.

Meanwhile, Hiccup enrolls in dragon training with the other village youths and makes time to visit the Night Fury, which he eventually names Toothless (such an adorable name!). He realizes Toothless is missing a part of his tail and makes an articificial tail wing for it. The two of them begin to forge a bond and Toothless realizes that the Vikings have a wrong perception of dragons. Apparently, they like being tickled, enjoy chasing mirror reflections, are afraid of eels and eat fish. The climax of the movie takes place when the Vikings discover the dragons’ nest and attempt to wipe them out.

OMG! Toothless is so cute, especially when it makes its goo-goo eyes. The story may seem predictable but I think the ending was quite touching and surprising. Love the bond between Toothless and Hiccup because I think it’s harder for the dragon to trust the human, especially when Hiccup has to navigate the dragon using the artificial wing. I didn’t catch it in 3D but I heard the flying scenes rival that of Avatar’s. 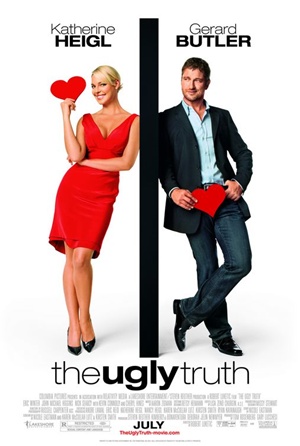 It’s a pretty crude version of the battle of the sexes but it’s really funny! The story’s about Abby Richter; romantically challenged, control freak and like most females out there, has a checklist for her perfect man. She meets Mike Chadway, the host of The Ugly Truth, who knows what makes men and women tick. They hate each other’s guts and strike a deal; if he can help her get her eligible doctor-neighbour, they’ll cooperate at work, if not he quits. She does get her doctor-neighbour eventually but the methods used are hilarious! Like the vibrating underwear, for example. Else, the witty banter between the two stars should be entertaining enough.

When I first heard of the movie, I wanted to watch the movie cos I liked the book. But as the release date got nearer, I was getting apprehensive as I read many reviews that the show was blah and the leads were miscasted as they didn’t have any chemistry. But I went for it and I didn’t regret it at all. I won’t say they have no chemistry but I’ve seen better movie couples.

Anyway, Gerry (Gerard Butler) dies of a brain tumour, leaving his wife Holly (Hilary Swank) alone with pretty much nothing except grief. However, he carefully plans her life after his death by sending her letters to help her get back on track. Of course, everytime she opens her letter, the floodgates open. And it’s nice to see how they met at first – so sweet! And I really liked GV’s souvenir – tissues. How appropriate.