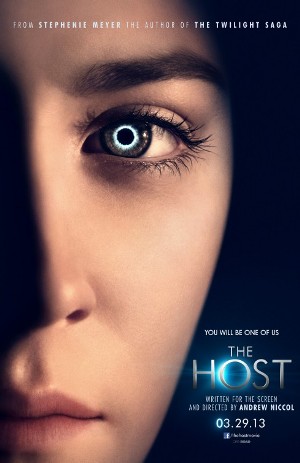 Based on Stephenie Meyer’s sci-fi novel, the movie takes place in the future where Earth and its inhabitants has been taken over by an extraterrestrial race known as Souls. Melanie Stryder, part of the human resistance, has been captured and Wanderer the Soul has been implanted in her to discover the location of other humans. But Melanie is not going down without a fight and her consciousness affects Wanderer’s feelings and actions…

Yes, I read Stephenie Meyer books and I enjoy reading them. I like the Twilight Saga! I like The Host too!

It is mainly a love story because Melanie’s feelings for Jared are so strong that it affects Wanderer (a.k.a. Wanda) too. Yet, Wanda’s actions draws Ian towards her. My favourite part is when Wanda, as Melanie, shields Jared from Kyle’s punches. To me, that really shows how Melanie is still “alive” with Wanda in her and probably how Ian took to her. The inner and outer voice of Melanie and Wanda can seem distracting at first but it is pretty amusing to see how they interact with one another especially where boys are concerned. There’s lots of kissing and punching so it isn’t overly mushy.

One last thing – don’t you just the song from the end credits? That would be Radioactive by Imagine Dragons.

Red Riding Hood is a new and darker take on the fairytale, The Little Red Riding Hood. The main difference is the protagonist is not so little and the big bad wolf is a werewolf. Amanda Seyfried stars as Valerie, the titular character, who’s in love with Peter (Shiloh Fernandez) the woodcutter but made to marry Henry (Max Irons) the blacksmith. Just as she’s about to elope with Peter, her sister gets killed by the werewolf and the entire town goes into a frenzy. The arrival of Father Solomon brings about unease when he mentions that the wolf can takes a human form by day, and it could be anyone in the village and Valerie is the key.

One thing was on my mind the entire time: WHO’S THE WOLF? At first, you might think it’s either one of the two leads – Fernandez and Irons, then suddenly, there are more candidates popping up. It’s as if the entire village is made up of werewolves. But I’d say I didn’t the identity of the wolf was unexpected. I say, when in doubt, go back to the original story – it’s just Red Riding Hood, her Grandmother and the Woodcutter.

And there’s been talks that this is like the Twilight version of Red Riding Hood and that might be true in some ways especially since Catherine Hardwicke directed this and Shiloh Fernandez almost became Edward Cullen. Well, let me just say I’m glad Robert Pattinson got the role.

Oh, I saw this really cute interview of Max Irons on Jimmy Kimmel Live, especially when he talked about his boarding school experience.