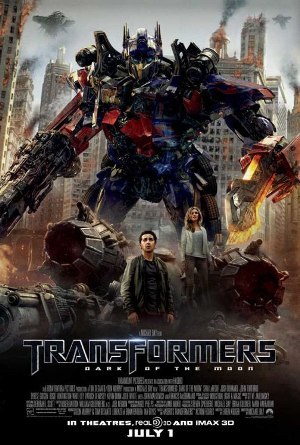 Sam Witwicky (Shia LaBeouf) is back with a new girlfriend, Carly (VS model Rosie Huntington-Whitley) and more Transformers action. When discoveries from the 1969 expedition to the Moon bring about new hopes of rebuilding Cybertron, Earth is in danger!

I think I prefer Megan Fox as Shia’s love interest, she seems more relateable and believable… Rosie is hot, yes, but I don’t think she was very convincing when she confronted Megatron. Plus, she didn’t look very comfortable with the robots.   As with any Transformers movie, it is so very sad to see “good” robots die/lose parts! But it always seem that the “bad” robots wreaks the most havoc because they have flashier skills (ie. Shockwave). Quoting Epps (Tyrese Gibson), “why do the bad robots always get the cool shit?!”

I thought there was a brief bromance moment when Megatron helped Optimus Prime in the big fight but I could still be in the cloud of X-Men: First Class. Bumblebee is still as adorable, and I really liked that scene where he transformed while Sam was still in the car – LaBeouf’s express was hilarious! Plus, Patrick Dempsey is a bad guy! WHY??? But he was quite good at playing bad actually and he seemed to enjoy it. Plus, him fighting LaBeouf is good fun!

This is the sequel to the 1987 film, Wall Street, where Gordon Gekko first appeared. I would say I waited considerably long for the movie’s release since it was supposed to be out in February.

Gordon Gekko (Michael Douglas) is released from prison after eight years and finds out that he is alone as his family has cut all ties with him after his son’s death from overdose. Fast forward a few years and the US financial markets are in a mess. Enter Jake Moore (Shia LaBeouf), an ambitious trader who is dating Gekko’s daughter, Winnie, and works at Keller Zabel Investments (KZI), a banking institution. After the death of his mentor, he tracks down the man responsible for the drop in price of KZI’s shares and enlists the help of Gekko, who tries to mend his father-daughter relationship through Jake.

What I loved about the movie is Gordon Gekko’s speech at the lecture he gave at Jake’s alma mater. He delivered it in layman’s terms and I actually understood what he said because I learned it in school. Terms like CDOs, CMOs, ABS, leverage and moral hazard do not sound alien to me. I think I was smiling to myself when I heard them. You can find Gekko’s speech here, and I find it pretty enlightening.

Gordon Gekko: You are the NINJA generation. No Income, No Job, No Assets.

Plus, Shia LaBeouf should stop riding bikes. It’s so distracting! You see a lot of scheming and plotting among the power players and it really opens your eyes to what lies hidden behind these people. One of my favourite characters is Jules, or Julie, who does this weird whistling thing whenever someone/something is in trouble or when he feels like ending that particular conversation. Charlie Sheen from the original Wall Street makes a cameo appearance too. 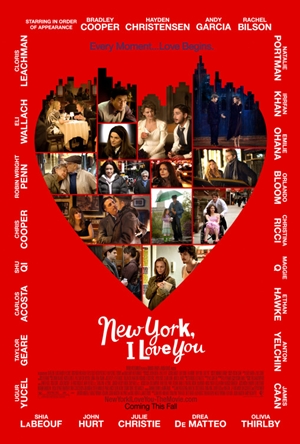 Caught New York, I Love You some time back, but I didn’t feel much love at all.

Like its predecessor Paris Je t’aime, it is an anthology film that joins several love stories in New York. Featuring stars like Orlando Bloom, Natalie Portman, Shia LeBeouf, Ethan Hawke, Hayden Christensen, Anton Yelchin, Bradley Cooper, Maggie Q and Shu Qi – it is an ensemble you would want to see onscreen. The Ethan Hwake/Maggie Q segment made me blush cos Ethan Hawke was speaking really awkward stuff. Some other segments just made me feel more ‘lust’ than ‘love’.

I only liked two stories, which were directed by Brett Ratner and Joshua Marston. Brett Ratner directed this segment about a guy’s prom night after being ditched by his girlfriend (a 10-second appearance by Blake Lively). It ended up being the best night of his life – with his useful belt. Joshua Marston directed the segment where an old couple celebrates their 60th anniversary and rediscovers love for each other. Awww…

Anyway, I liked Paris Je t’aime better. Each segment brought out the theme better and there’s Gaspard Ulliel! I can still remember he charmed me the moment his messy hair, grey singlet, lit cigarette appeared onscreen. Not to mention he speaks smouldering French. Oohlala.

I saw Transformers: Revenge of the Fallen! It’s great!

The movie starts with lots of action, with the remaining Autobots working with the military as part of a top secret section – Nest Ops. Together, they hunt down the remaining Decepticons still hiding on Earth. It’s been two years since the first movie – where the Autobots and Sam defeated the Decepticons – and Sam is ready for college. Dealing with the usual teenage anxieties in college, he starts having visions of strange symbols which he later discovers leads to an alternate energy source brought to Earth by a species of Autobots, the Primes, millions of years ago. The Decepticons, led by their leader-in-hiding, the Fallen, tries to get hold of Sam to find the location of the energy source, in a bid to rebuild the Decepticon race.

Where do I start?

Alice or that hot girl who tried to seduce Sam in college is super scary! There’s definitely more than meets the eye with that kinda girl. I liked how they resurrected this ancient Decepticon, a BlackBird jet aka Jetfire, with all the rusty parts and they even teleported! Though they were initially fearful of Jetfire, they later found out he switched sides to be an Autobot. It’s all about choice! The ending that included the sacrifice of Jetfire was really touching. Never thought you could tear up in a movie full of robots, right? Oh, the mini Decepticon probe that Mikaela caught is super cute too! Upon hearing that robots can switch sides, he tugged on her leg, like some little puppy! The twin Autobots (ice cream truck) were good too; loved the surprise they did after one of them got sucked in the destructive Decepticons.

Plus, I’ve only just realized that Optimus Prime is a type of Autobot, I thought Prime was just a name – now I know it’s a species. Strange how it’s always the Decepticons doing the cool stuff, like morphing together to form a LARGE machine, or just morphing from hundreds tiny steel balls to form an even larger Decepticon. Amazing.

There’s a great soundtrack too! With Linkin Park, The All-American Rejects, Nickelback and Green Day, to name a few… new thing to obsess on! =) 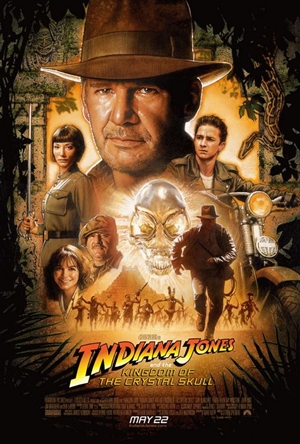 If the previous post was any clue, this is it.

I watched Indiana Jones and the Kingdom of the Crystal Skull! It was really one great adventure and I enjoyed every minute of it. There’s action, adventure and humour. Harrison Ford is still as good, and from what I read, he does almost all his stunts. Shia LaBeouf, rumoured to be groomed to be the next Harrison Ford, is great as well. From Transformers and Disturbia to this… I can’t wait for his next movie, Eagle Eye, to be out. Cate Blanchett’s transformation was very convincing, totally Ukrainian. Go catch it! 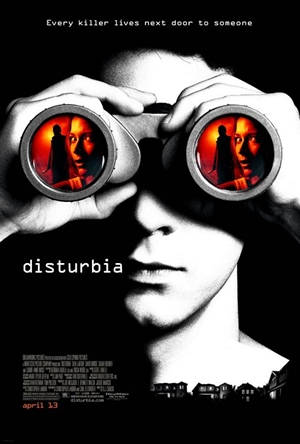 At first I was rather freaked out since I realized I was the only one in the theatre but luckily as the trailers played, more people came in. If not, I might just completely freak out when the psycho appears behind some unsuspecting victim. Eeew.

The movie starts off fine but once the blue Mustang appears, the story takes a shift and all eyes are on the seemingly friendly Mr. Turner. It’s scary how Kale (Shia LaBeouf) uses his friends to help him in his stakeout since he’s under house arrest. Especially when his friends are being threatened or whose lives are at stake. It’s scary to see the interior design of Mr. Turner’s house, which has no lack of sharp instruments (saws, surgical knives, drills etc.) and hidden passages.

I shall not reveal too much of the plot but I think that the serial murderer is a freaky creep and the way he handles his corpses just freaks people out. Talk about obsession – it’s just scary. Brrr… Plus, Kale’s kiddy neighbours are just plain irritating and I must say they got their just desserts. 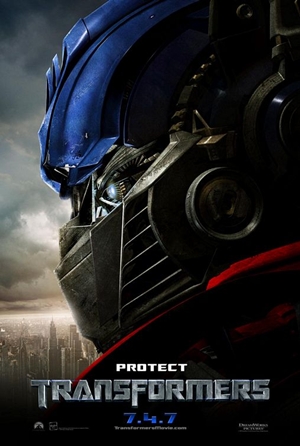 I watched Transformers! I’ve been waiting for this day since I saw their fantastic trailer months ago.

The movie was totally kickass, okay?! The effects are mindblowing and the machines are so cool! I love it when Bumblebee helps Sam to woo Mikaela through songs and when he assimilated into this slick car when Mikaela commented that he was transforming into ‘a piece of junk’. The Autobots were damn funny when they were trying to hide from Sam’s parents at his house, imagine big mighty Autobots hiding under a small house? The battle scenes were great too! Especially when there was this Scorpion (Decepticon) attacking them. It’s like seeing what they can do in their full glory – which is attacking. And I’m kinda surprised to see Prison Break’s Sucre in it! He’s still speaking Spanish so I don’t really understand what he’s talking about. Sam, played by Shia LeBeouf, is totally panicky and geeky. His cover was blown when one of the Autobots detected his don’t-know-what level and concluded that “he wants to mate with the female”. Oh well.