The gang is back!

Dom and the guys have retired after the events from Fast Five but reunite again when Hobbs (Dwayne Johnson) offers to clear their names in exchange for taking down Owen Shaw (Luke Evans) and Letty (Michelle Rodriguez), who has been presumed dead.

There is definitely more action now. Gina Carano (Haywire) is Hobbs’ partner and she really packs a punch. But Michelle Rodriguez is not to be trifled with either.  The two of them plus Gal Gadot definitely give the fairer sex an edge. Too bad about Elsa Pataky, come on, give Mrs. Chris Hemsworth a chance to fight!

The franchise has always been about cars and we were treated to some cool cars, particularly those modified cars that Luke Evans drives. The biggest WTF moment happens at the highway with the tank. I will not reveal it so keep a lookout for it if you watch it. It is as unbelievable as it is jaw-dropping.

STAY TILL THE START OF THE (ACTUAL) CREDITS FOR AN EXTRA SCENE! 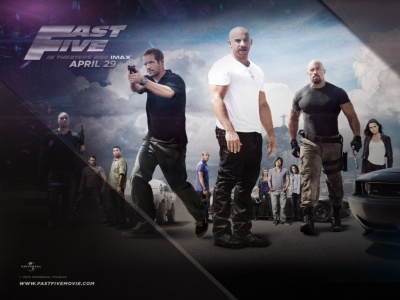 After Brian O’Conner (Paul Walker) and Mia Toretto (Jordana Brewster) breaks Dom Toretto (Vin Diesel) out of custody, they reunite in Rio de Janeiro, Brazil. Now wanted fugitives, they have to complete one last job to gain their freedom. With a local corrupt businessman, Reyes, and US DSS agent Luke Hobbs (Dwayne Johnson) after them, it’s going to take Dom and Brian a team of their own to finish the job before they get caught.

Part of the The Fast and the Furious franchise, this film has come a long way since its debut in 2001. I have only seen the first two but I can say tis instalment is 131 minutes of pure adrenaline. They are constantly on the run and what’s even better is that they have a good looking team of street racers (Paul Walker, Jordana Brewster, Gal Gadot, Sung Kang, Tyrese Gibson, etc).

Personally, I think the female racers kicked ass! Mia’s opening scene set the tone of the movie while Gisele (Gal Gadot) came the closest to beating that 10 second camera recording and she got that palm print to solve all problems. Plus, she might just be the most beautiful garbage truck driver EVER. Dwayne Johnson aka The Rock’s brawl with Vin Diesel was totally worth half the price of the movie ticket, and it didn’t hurt to see them on the same side of the fence, one heavily-muscled arm to another. Though it seemed that he only had that oneshirt throughout the entire movie. The great thing about such heist movies is that they always manage to fool the audiences (along with the dumb cops) and it bugs me that I do not have enough eyes to see the tiny details that elude me because I was distracted by fast cars, flying roadblocks and explosions.

Stay for an extra scene during the credits that might hint of another sequel.